The older I get the more stories (although truthful!!!) I tend to tell.  I took the RPR right before I graduated.  And I passed.  That was May 1981.  225/200/180.  We transcribed on IBM Selectric II's.  (Word processors and CAT didn't exist back then).  We had to bring typing paper, a dictionary, ink pen, AND a typing eraser.  I think we got an hour and-a-half for each segment.  AND all three parts had to be passed together.  Here is a picture of the writer I used.

The purpose for this little quip is to let you know having the best, most expensive writer is not going to automatically help you pass the RPR (or state test).  When I took that RPR, most had the brand new writers (manual green, gold, charcoal).  Some had the one in the cute little pastic box.  I had this!!!  When I took that test I was at my very best emotional, mental and physical state.  Back then the test was live.  It was a big room, with the chairs lined up in very long rows.  We were already given a seat number.  After the test then they announced that those staying to transcribe were to stay seated.  Those not transcribing were to leave immediately. After the non transcribers left we would be dismissed to the room by rows.  (To the typing lab, with lots of IBM Selectric II's).

While we sat there, I watched LOTS of girls walk out of that big room, some solumn looking, some with tears running down their face, some just  bawling.  When we got to the typing lab there were a lot of empty typewriters. 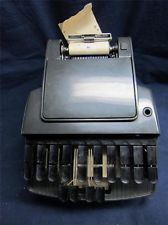 Kinsie Rowen is now a member of CSRNation
Thursday
Welcome Them!