Yesterday, all of a sudden and out of the blue, these pop-up messages came from "Windows Security" warning me that I had a virus. The pop-ups were official looking, some red in color, and they increased in speed, popping up, asking me if I wanted to download Antivirus Live to get rid of what was wrong with my computer.

I could not access Internet Explorer, my Trend Micro PC-cillin Security software, AOL e-mail -- NOTHING! Every time I clicked an icon on my desktop, a new pop-up message would come up, warning me that I am infected, promting me to download Antivirus Live now, which, by the way, costs about 50 bucks.

Fortunately, I have a couple computers. So I went to my laptop and searched for "Antivirus Live" and soon found out that it is, indeed, a virus itself, one that needed to be taken care of immediately. After a little research on Google via my laptop, I downloaded something called Spy Doctor on a thumb drive, took it over to my desktop, and ran it. It removed the virus called Antivirus Live.

I was feeling so strong and in charge of things yesterday until last night. Then I got a message from Spy Doctor, after a Spy Doctor scan, that said my desktop had a lot of hidden problems that needed fixing, and that I should pay Spy Doctor 50 bucks for the "full" version to clean up my desktop. I decided to then uninstall Spy Doctor. Though it did fix my computer, I don't like being tricked into buying software I may not need.

I share this with you all in case it ever happens to you. I was a little bit scared yesterday that something major was going on with my main desktop computer, a Dell XPS. Spy Doctor did get good reviews, but I also read that it is a power hog on one's computer.

Permalink Reply by Jennie Ann on December 31, 2009 at 2:56
Here's what a couple of the warning pop-ups looked like. There were MANY, but these are just two. Also, I had these red warning icon thingies multiplying on my tool tray, one right after the other. Talk about a nightmare that just kept getting worse and worse... 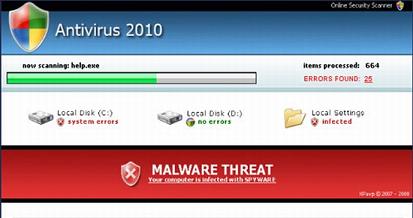 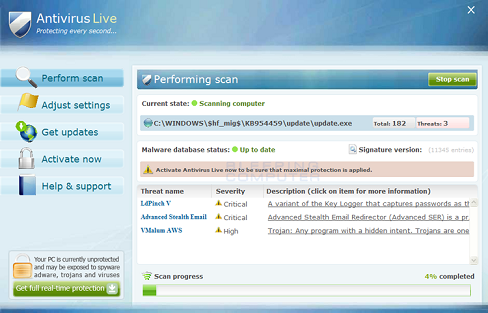 Permalink Reply by Jennie Ann on December 31, 2009 at 3:02
After reading more about this virus, it said that some rogue websites load Antivirus Live in their links on purpose.

I am always on Google, every single day of my life, looking up spellings in transcripts. This is the first time I have ever encountered something like this.

I'm not sure how to protect yourself from it. There's no warning. You click a link, and it starts taking over your computer.

This is computer-sniping terrorism, but I ain't going to let it keep me from working on my beloved Google. In fact, it was through Google on my laptop that I fixed my desktop. Thanks, Google!

Permalink Reply by Mary Jo Cochran on December 31, 2009 at 5:59
I was there - last year. Microsoft has a program, Live One Care (google it) and it will deal with Antivurus.
You can use it for free for 90 days.

Permalink Reply by Valencia Caston Simmons on December 31, 2009 at 7:16
I lived this nightmare a few months ago. I chose to use a hard drive case to back up my files to a thumb drive then reformatted my hard drive. That way, I knew with 100% certainty that whatever was plaguing me got wiped out for good. I had to reinstall some of my programs, but it was worth it.

Permalink Reply by Janet on December 31, 2009 at 7:34
I had a virus like that called Spyware Guard 2008. It prevented me from going to certain websites and downloading programs to get rid of it, like Microsoft's virus removal tool. I kept searching on my computer for Spyware Guard 2008, and I'd find it, delete it, and it would duplicate itself in another location. I even went into the registry files in the C: command prompt, and it wouldn't allow me to delete it.

I had to reformat my drive. What a pain. It's very difficult to know whether the websites offering a fix to the virus are the ones actually creating it.

I was told to avoid the sites with the glitter text and graphics, that the viruses are frequently attached to those sites.

Were you using Internet Explorer when you got infected? If so, maybe a switch to Firefox might be a good idea!

Another idea would be to download a disk image of SuperOS (a tweaked version of Ubuntu) and burn it to a CD. Next time one of your computers gets infected, just install SuperOS instead of Windows. Once that's done, you can surf all you want, and your laptop won't get infected!

Permalink Reply by Jennie Ann on January 1, 2010 at 4:41
Thanks for the great tip, Glen. That's going to come in real handy for sure. I will do that today.

I have Firefox downloaded, but it seems to run too slow for me. I'm always racing against the clock, so to speak, and those extra few seconds it takes drives me bonkers when I am searching for a spelling of a word.

I think you should be the CSRnation's Resident Computer Guru, Glen! You share a lot of wisdom on these matters, and I appreciate it very much! :-)

Permalink Reply by Kwanna Collins on January 4, 2010 at 17:50
Hi Jeannie this just happened to me last week on my desktop. It wont allow me to do anything. The same thing you experienced, i am experiencing now. Its so frustrating because these viruses just totally take control over your computer and its hard to get them off. I am just glad it didn't happen to may laptop. Lucky my best friend's dad fixes computers and he lives right upstairs from me, but if i had to take it to the Geek Squad, it would cost a fortune.